Home owners and property developers in the city of Vancouver will follow new demolition waste recycling requirements for houses built before 1940 thanks to the Green Demolition Bylaw which went into effect on September 1, 2014. From now on, a minimum of 75% of the demolition waste from these older homes will be recycled; and that number increases to 90% for character houses from the same era.

We had the opportunity to interview Senior Sustainability Specialist Hugo Haley from the City of Vancouver to find out more about the Green Demolition Bylaw and what it means for home owners and developers. Here’s what he was able to share with us:

Q:  What led the City of Vancouver to establish these new recycling requirements for pre-1940’s houses? 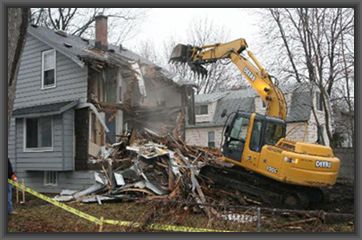 Traditional demolition sends tonnes of waste to our landfills.

A: Metro Vancouver’s regional solid waste plan requires all municipalities to do more to encourage recycling of construction and demolition waste. Also, the City of Vancouver’s Greenest City Action Plan’s Zero Waste goal is to reduce the amount of solid waste disposed to landfill by 50% by 2020. To achieve this goal, the City intends to improve demolition waste recycling performance, and put in place policies to achieve 50,000 tonnes additional recycling from the demolition and construction waste sector.

Q: What is the difference between a pre-1940’s home to one that was built later that prompted this policy? Will newer home demolitions become subject to similar recycling requirements in the future?

A: Homes built before 1940 often have valuable architectural features … built with old growth timber and other valuable materials. The City would like to discourage older character homes from being demolished … if they are going to be demolished, the City wants to ensure that a high percentage of demolition materials are reused or recycled. In the future, the City would like to include recycling requirements for all ages classes of homes to make sure valuable and usable materials are kept out of the landfill.

Q: What is “deconstruction” and why is it being used to demolish these older homes?

A: Deconstruction is an alternative to traditional demolition. Deconstruction is a more systematic and careful approach to taking apart the house where more of the materials are kept intact and can then be separated for reuse and recycling. 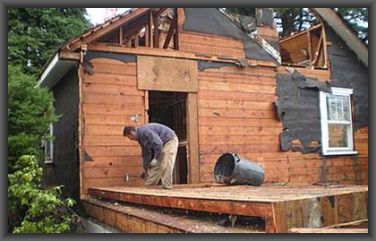 Q: Is this new bylaw unique in Metro Vancouver, perhaps even in North America?

A: These requirements are not unique in North America. There are numerous municipalities in the United States that require demolition waste recycling, with California’s requirements applying state wide. Cities with similar policies include Chicago, Seattle, San Fransicso and Boulder. In Metro Vancouver, the city of Port Moody has such a policy.

Q: Do you have any relevant statistics you can share including how many demolitions and how much material you think will be diverted from the landfill each year?

A: There are about 1,000 homes demolished in the city of Vancouver every year. About 350 of those are from the pre-1940 era and subject to the new requirements. We expect about 12,000 tonnes of additional reuse and recycling to be achieved in the first year … This amount will increase as the requirements extend to more homes.

Green Coast Rubbish President & CEO Eamonn Duignan wrote a letter to Council in support of the new bylaw saying “we whole heartily support this policy initiative … far too often we see reusable or recyclable material landfilled, simply because there is no regulatory framework in place.”

If you are considering the deconstruction of a pre-1940’s home, here are some helpful links for more information:

We love to work closely with green conscious businesses who care as much the environment as we do. That’s why we’re really excited to have Pacific Carpet Recycling as a partner. They are the only carpet and underlay recycler in Vancouver, and they’re doing great work around the Lower Mainland. 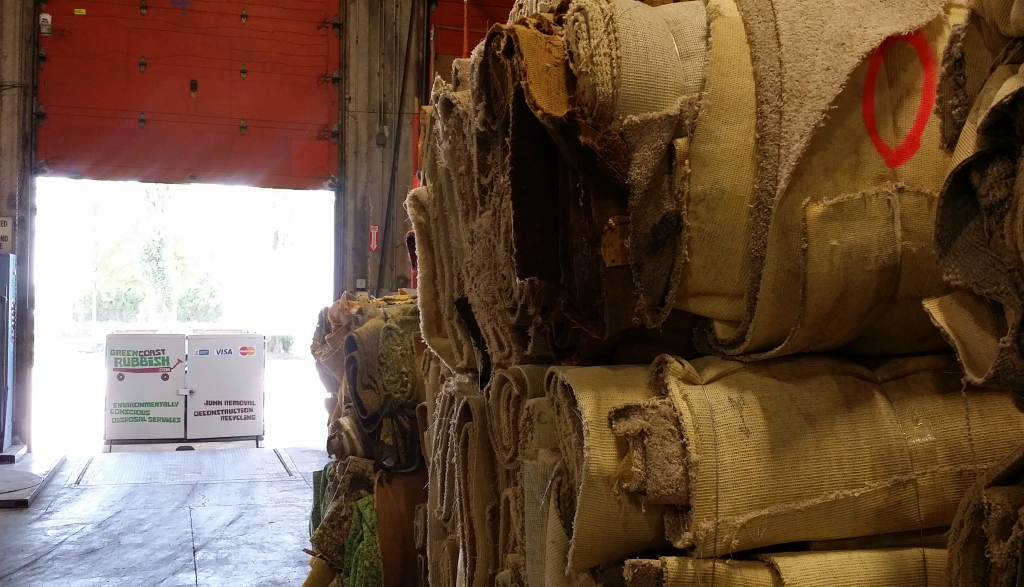 Carpet is something that most people take for granted; not really giving it much thought until they are looking to renovate a space. But the amount of waste created from carpet being thrown into our landfills is mindblowing — as much as 80 million lbs are thrown into garbage dumps in Metro Vancouver alone! Even worse, it can take as long as 50 years for it to break down once it’s in there. But it doesn’t have to be this way. Being a petroleum-based product, many types of carpet and underlay are recyclable, and can be made into new flooring, clothing, furniture, auto parts, and other items we use on a daily basis. 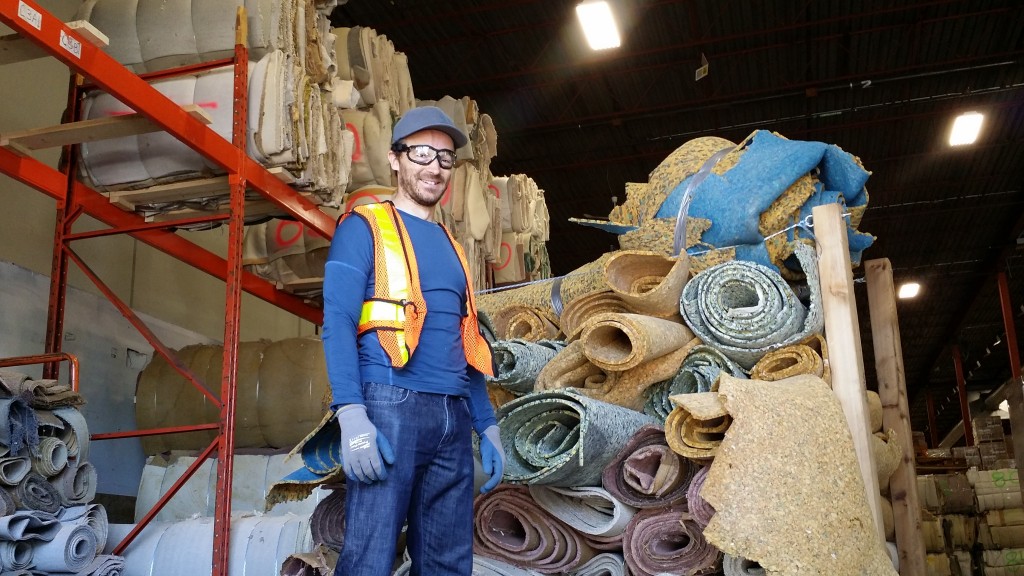 In recent years, PET (Polyethylene terephthalate) carpet has gained popularity, because it’s manufactured using recycled pop bottles. In theory, this sounds like an excellent green alternative, but at the present time there are no effective means to recycle carpet once it is made from this material. If you are looking for the most environmentally mindful flooring, PCR suggests opting for Nylon carpeting instead, which is completely recyclable.

Though Pacific Carpet Recycling does not deal directly with the consumer public, Green Coast Rubbish has partnered exclusively with them, allowing us to remove the carpet from your home or business (and any other waste that you might need hauled away) and deliver it to PCR on your behalf. If you have any questions about recycling carpet, or the work we do at Green Coast Rubbish, please never hesitate to contact us.

Taking care of the environment, and helping people in our communities: these are two fundamental ideas we’ve built our company on from the start. They help us strive to reuse or recycle many unwanted materials, keeping them out of our landfills. If those materials can then be used to help local families put a roof over their heads, why wouldn’t we do everything possible to make that happen? 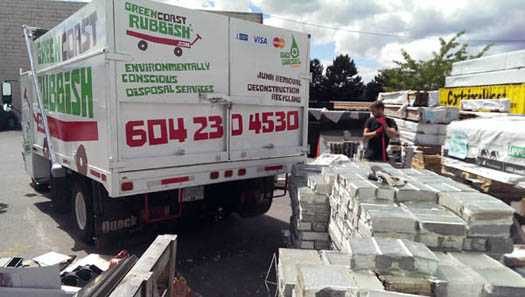 Because we care so much about this, we like to give shout-outs to similar minded businesses who are working hard to make a difference. One such business is ReStore, which opened it’s doors recently in North Vancouver.

ReStore is a non-profit organization that sells new and used building and home improvement materials that have been donated to them by builders and homeowners; with 100% of the money raised going toward Habitat for Humanity initiatives in the Greater Vancouver area. Run almost entirely by volunteers, ReStore/HH helps to provide modest-income families with affordable, accessible housing options (while at the same time giving some pretty sweet deals to people looking for items to complete renovation projects around their homes). 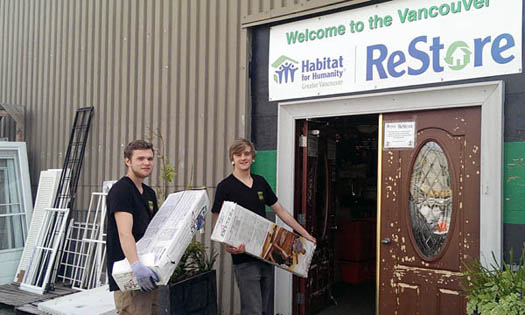 We believe in the great things that organizations like Habitat for Humanity are doing locally, so whenever possible GCR salvages usable material from the jobs we do and donates them. A recent demolition of an office on the North Shore allowed us to dismantle approximately 790 glass blocks from their walls and send them to ReStore—which could potentially translate to a resale value of thousands of dollars—toward their efforts in helping more people have homes in our communities. 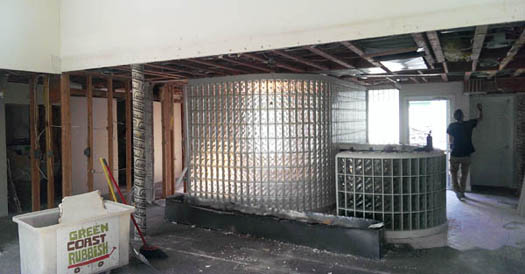 Last year alone we were able to donate approximately 9 tonnes of various goods and materials to charities throughout Vancouver who can make good use of them. Check out what ReStore is doing; they are located at 126 Harbour Avenue in North Vancouver. 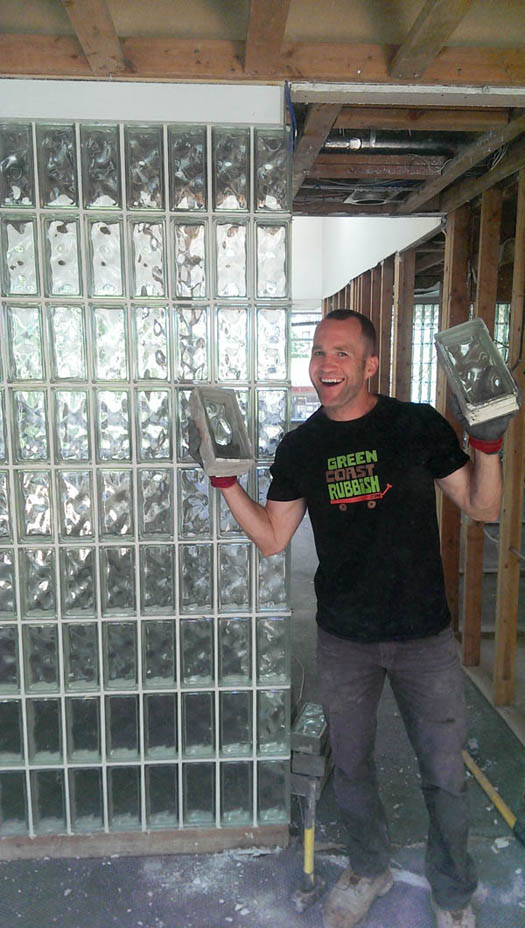