Over the past two years, the City of Vancouver has been partnering with TerraCycle Canada on a pilot program to recycle cigarette butts in downtown Vancouver. So why is cigarette recycling such a big deal?

Cigarette waste is global problem with trillions of cigarette butts being littered around the world each year. According to the David Suzuki Foundation, 95% of cigarette butts are made from cellulose acetate, a type of plastic that is not biodegradable. One cigarette butt may contain up to 60 human carcinogens which also can be deadly for animals and fish. Not to mention the well documented human health hazards of smoking.

TerraCycle Canada has created a unique cigarette recycling program that is available for residential or commercial purposes. They accept cigarette and cigar butts as well as the packaging. 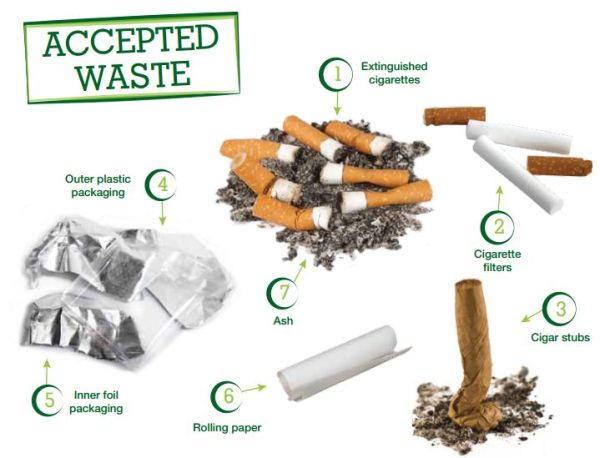 In terms of recycling, the ash is used in fertilizers while the cigarette butts themselves are recycled into industrial products like plastic pallets. Any remaining tobacco in the butts is composted.

In November 2013, the City of Vancouver began partnering with TerraCycle Canada on a pilot project to locate cigarette butt receptacles in four downtown Business Improvement areas – downtown Vancouver, the West End, Robson Street and Gastown. Two inner city organizations are involved in staffing the program: EMBERS installed and maintains the receptacles while United We Can services the receptacles and ships the cigarette waste to Terracycle. 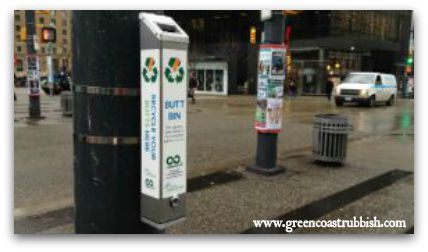 In 2014, it was discovered that while tens of thousands of cigarette butts had been recycled, the receptacles themselves were having the unintended consequence of creating smoking areas. Adjustments were made with some of the receptacles being moved or removed.

City of Vancouver staff are evaluating the results of the pilot project and working with Vancouver Coast Health and the Business Improvement Areas to assess the pros and cons of this approach to cigarette recycling.

Kai-Lani says the City is currently not planning to expand the pilot to add additional locations or receptacles until an overall strategy to reduce cigarette butt litter that includes all the necessary components of a successful anti-litter program including education, enforcement and infrastructure is developed.

Other strategies being considered include advocating for tobacco products to be added to the province’s Recycling Regulation. This would be the first step in establishing a deposit refund system for cigarette butts, similar to beverage containers.